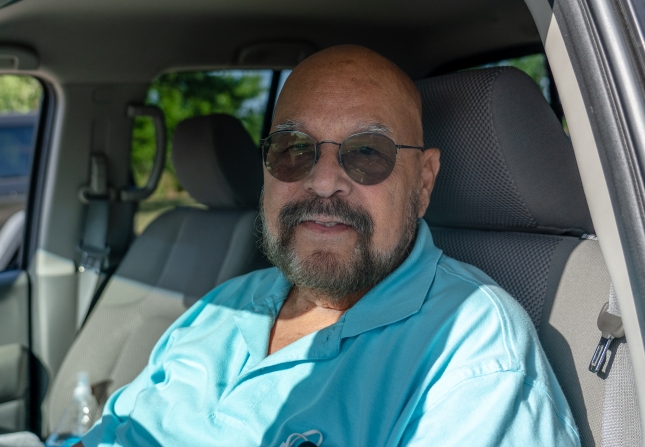 This past Easter Sunday, while at church in his hometown of Cuero, TX, Julius suffered a heart attack. After receiving the care he needed in the hospital—and giving folks quite a scare—Julius is now on the path to recovery. But his daughters did not hesitate to have him relocate to Hays County, where they currently reside, to be closer to him while he recovers.

A month since the move from Cuero, he’s now settled into his own apartment, where he also works part-time as a porter. On the days when he is not working, Julius is at the hospital doing his cardiovascular rehabilitation three times a week. In addition to his physical rehabilitation, he has a number of new medications to get used to taking daily. “I used to take one pill a day, for my blood pressure,” Julius says. “Now I take like six. It’s a lot when you’re not used to taking all this stuff.”

Just before he suffered his heart attack, Julius had spent fifteen days in the hospital recovering from a pancreatic attack. “I’d never had anything physically wrong with me [before],” he says. “I’ve been a pretty healthy guy…it was a pretty good scare.” While Medicare helps him cover some of the costs, it doesn’t cover all of the expenses accrued from his hospital stays. Now his earnings must go towards paying what he owes the hospitals for the out-of-pocket expenses, which total $2,600, in addition to his regular living expenses. “I can’t pay you all,” Julius says. “So I pay a little bit, what I can.”

In this period of adjustment, Julius is able to find some relief in the assistance that the Food Bank can provide him. “It’s kind of bad [right now]. I’m 72 years old, I can’t start over,” Julius says. “But what can you do? We put it in God’s hands. One day at a time.”