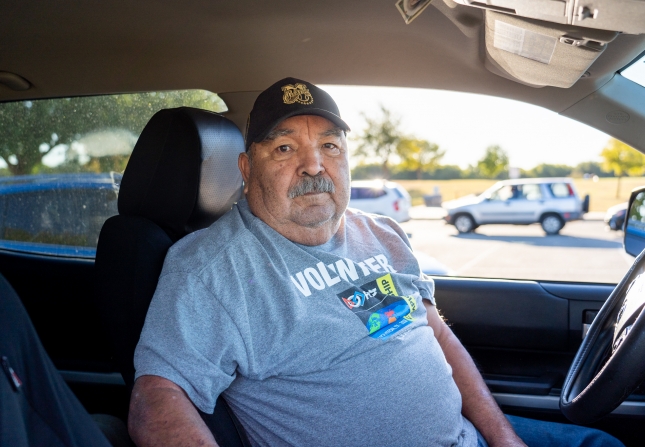 It was over a year ago that Roman first began visiting his local mobile food pantry. When a 500 pound machine fell on his knee at work, the injury left him temporarily disabled for an entire year. He was forced to retire at 69 years old. With months of rehabilitation for his injury and a new fixed budget to adjust to, he turned to the Food Bank to help support his family.

While his Social Security checks provide an income for Roman’s family, they don’t cover all their needs. “Everything is so expensive right now,” he says. “Then you add the doctor visits and medicine—insurance doesn’t cover everything.” Like many Central Texans, Roman has had to grapple with rising costs this past year. “I live with my wife and our son,” Roman shares. “He’s 33 years old but he depends on us because of his epilepsy.”

Roman’s son, Raul, experiences sudden and severe seizures due to his epilepsy. “Sometimes he falls suddenly and doesn’t know when they are coming,” he says. “The doctor says he’s not able to work because of it, so he depends entirely on us.” But at 70 years old, Roman worries for his son’s future and his continued care. “What will he do when we’re no longer here?”

Since his knee injury, Roman’s rehabilitation has enabled him to walk again. He keeps busy taking care of his family, but he also finds time to give back to his community as a volunteer at his local churches and at El Buen Samaritano. A partner of the Central Texas Food Bank, El Buen provides their own food distributions and additional resources for neighbors in need of health care, social services, education and nutrition. Roman volunteers at their distributions by preparing bags of food, setting up tables and tents and handing out food. “It’s only a little while—one or two hours,” he says. “It’s important for them to have volunteers to help out.”

With all the challenges Roman has faced, he continues to show strength for his family and community. “We have to face life,” Roman says. “A little bit at a time.”