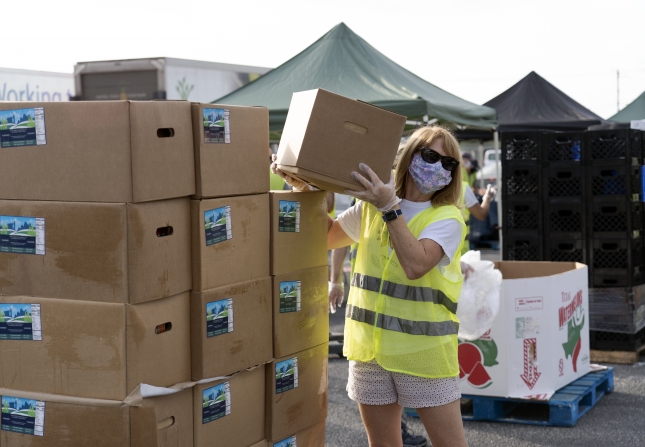 In 2017, husband and wife duo Raj and Anna Asava partnered with the North Texas Food Bank for a single-day food drive to help wipe out the hidden hunger in America. The couple began reaching out to their network to explain how hunger can affect anyone in their community. While hunger in India is associated with homelessness, hunger in America is hidden, Raj said.

HungerMitao has evolved into a volunteer-driven grassroots movement focused on raising awareness about hunger in America, improving community engagement, and channeling resources and contributions from the Indian American community through campaigns and multi-year commitments to fight hunger across the Feeding America network of food banks.

Since its inception, HungerMitao has raised nearly 20 million meals and has expanded to food banks in North Texas, Houston, New York City, Atlanta, and Seattle.

Due to COVID-19, this year’s food drive is happening in collaboration with Feeding America and their network of 200 food banks, including the Central Texas Food Bank, which serves a 21-county area.

“I couldn’t imagine what would happen to the community if there were no food banks doing the work that they do, so we really appreciate that work,” Anna said.

We’re excited to celebrate India’s Independence Month and engage with the Indian-American community to fight hunger through a virtual food drive with the goal of raising $10,000 for Central Texans in need.

To help kick off the virtual food drive, Raj and Anna have donated $2,000, helping provide 8,000 meals for Central Texans.. Funds raised will help support the growing need during the pandemic. Want to participate? Donate here.