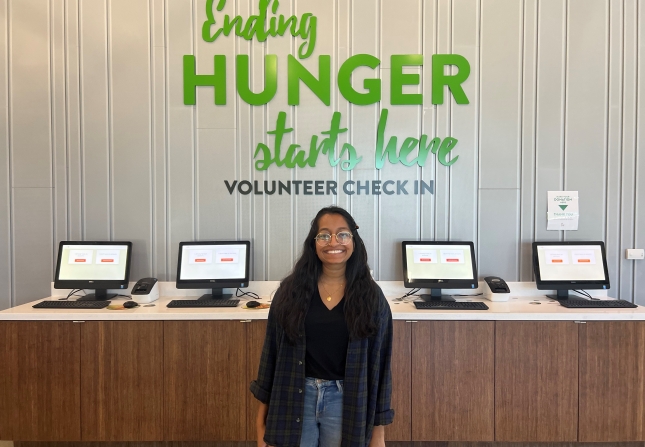 Zahra Bhoy (she/her) found her way to the Central Texas Food Bank by way of Morocco. During her last year of college at Indiana University, she participated in a study abroad program in Morocco to immerse herself in the Arabic language. "Building relationships in a second language taught me a lot about how to work with people who are different from you and how to combat cultural differences," she shares. The confidence and resilience she built over those nine months of studying abroad also came with life-long friendships. When she returned to Indiana, she realized just how much she missed her study abroad friend group, several of whom had ended up in Austin. They encouraged her to join them and apply for jobs in the area. As luck would have it, the Central Texas Food Bank was the first to extend an interview her way.

Zahra started on the Food Bank's Community Engagement team in June 2021 as Community Engagement Coordinator and was promoted to Specialist six months later. "My manager at the time was the one who told me to interview for the position. I thought, 'I'm only 6 months into this job, there's no way I'll get promoted,' so I didn't even think about applying for it." Zahra goes on to explain how important it is to have a team, particularly a supervisor, be so encouraging and supportive. "I feel really grateful to be on the team that I am because I'm able to learn a lot from my bosses and be in a healthy, supportive environment."

Being an active member of her community stems back to childhood for Zahra. Growing up in the Chicagoland area, Zahra's parents were adamant about giving back to the community. They often volunteered at soup kitchens as a family. "It was something that never made sense to me as a kid, why [food insecurity] exists," Zahra shares.

In early adulthood, Zahra became more involved in advocacy work at her local food resource center, Mother Hubbard’s Cupboard, and learned firsthand about the complexities of food insecurity. Her volunteer role revolved around building community with the clients. She would host "coffee talks" and hear the stories that brought clients to Mother Hubbard’s Cupboard. "That really made me see the power of community building and what an organization like that could do for the community. And also how vital it was for free food to be available to people with no strings attached." The motto Mother Hubbard’s Cupboard used to reinforce working with their clients and community to treat the root causes of hunger was "Solidarity, Not Charity." Zahra says we do the same here at Central Texas Food Bank, "We do a really good job at giving our clients agency by the way we tell their stories."

In her role as Community Engagement Specialist, Zahra is responsible for the Food Bank's peer-to-peer giving campaigns, stewardship communications and a portfolio of donors. She emphasizes how amazing it is that we can take a $1 donation and turn it into four healthy meals for our neighbors in need. "It's so inspiring to be around people doing such amazing work and who are so committed to the mission. Being at the Food Bank inspires me to grow as a person and be better." A large project on the horizon for Zahra is Austin Restaurant Weeks from September 1st through the 11th. She works with other members of the Mobilizing Communities team to put together this two-week-long dining extravaganza featuring specially priced lunches, dinners, and cocktails at restaurants. A portion of the price of each meal goes directly to the Food Bank.

“As an adult, I understand that food insecurity exists because of the systems we’ve built in our society,” Zahra shares. She encourages anyone interested in food insecurity to volunteer at the Food Bank or spend time learning about the federal policies that impact this important issue.

Zahra is one of Central Texas Food Bank's May 2022 Employee of the Month. She enjoys hiking, cooking, reading, and her mom's homemade daal chaawal.