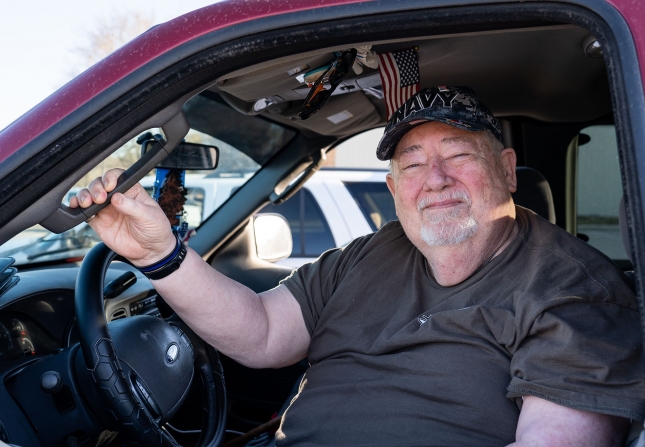 Ken found himself fallen on hard times after his wife became ill and was in and out of the hospital last year. “She was in there three times and they ended up having to stop her heart and then restart it,” Ken says. “And if you don’t think I was scared—I knew God was going to take care of her, but you just never know.” Now her primary caregiver, Ken is responsible for administering her medicine, including her insulin shots. Living on a fixed income while caring for an ailing partner, Ken is grateful to have the support from the Food Bank to help feed his family.

Ken’s appreciation for service work comes from a long-standing culture of community in his own life and upbringing. “My life has always been to give,” Ken says. Prior to retiring, Ken served as a police officer for 44 years in Texas, 30 of which he served in his current hometown of Temple where he also taught law enforcement courses at Temple College. The desire to help and support the community is what drew Ken to this line of work for four decades. With so many years on the force, he can recount a number of experiences that have impacted him and taught him about the importance of community values over his lifetime—values which he continues to uphold to this day as a minister and active member of his community. “I just am so proud of Temple and the community and the service that we have,” says Ken.

Raised by a registered nurse and a military pilot, Ken was taught at an early age the value of hard work and giving back. “My father was a pilot in World War II,” Ken recounts. A tough, self-taught man, Ken’s father passed on a lot of knowledge to his son, who eventually went on to become a pilot himself and teach others how to fly. Ken’s mother embodied for him the value of helping those in her community. “She was a wonderful lady,” Ken says of his late mother, referring to her as his guardian angel. Ken looks at the local volunteers who help hand out food at the distributions in the same way. “I think these people are guardian angels because they’re helping us and they’re helping the community.”

“This is so good for all the people here. What they do here helps us, helps me, helps my wife and helps our children in the community. So, it's a wonderful thing.”